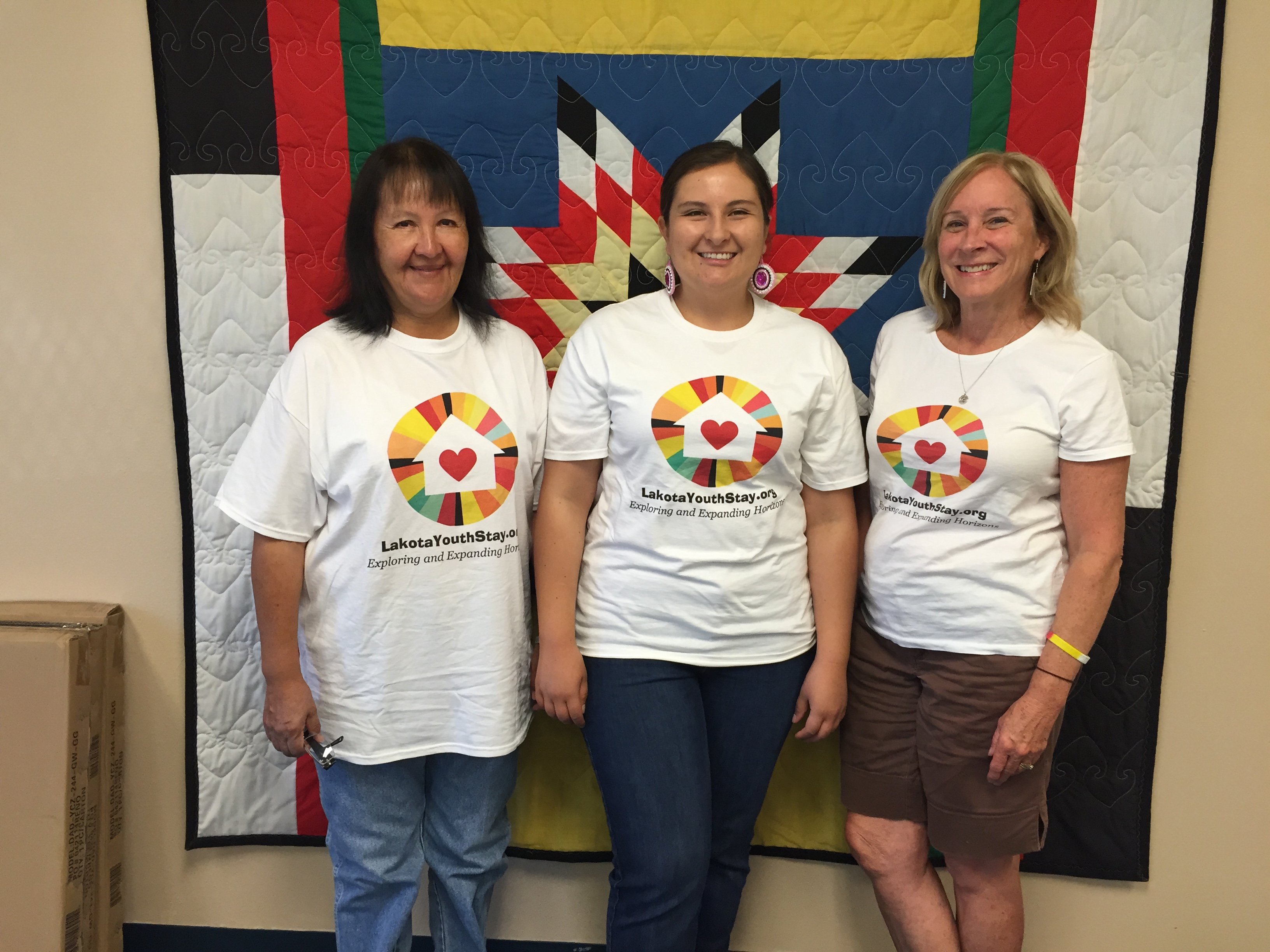 The Lakota YouthStay Program Makes Connections on the Reservation

The “rollout” of the Lakota YouthStay Program on the Pine Ridge Reservation, Summer 2016. The LakotaYouthStayMobile – Bruce Roberts at the wheel.

We drove hurriedly along the gravel backroads of Nebraska to get to Pine Ridge Village in time for the parade. The Lakota Nation Wacipi parade takes place on the Pine Ridge Indian reservation in southwestern South Dakota and it is a much loved event.  By the time we arrived, the Re-Member float was already set up and waiting in line for this annual celebration.  We rushed to park our rental car, unloaded the banner, backpacks and candy, piled them into Re-Member’s pick-up truck and climbed aboard, grateful that we were able to join Re-Member’s float!  Families and children were lined-up along Rte. 18 and the excitement in the air was palpable.  We had set up our web site and other social media, we had done our homework, but it was here – at the parade – that we were really going to introduce Sanctuary UCC’s new program, Lakota YouthStay, to the Lakota people! Smiles and the LakotaYouthStay Backpacks!

As the crowds continued to gather, the line-up of some 130 entries – floats, horseback riders, decorated pick-up trucks and assorted Indian vehicles – lumbered down from the Pine Ridge Hospital and made the left turn towards Big Bat’s Gas and Convenience Store at the heart of Pine Ridge Village. The long, slow journey rewarded us with Lakota elders on their lawn chairs, giddy kids with plastic bags at the ready, and extended families reaching out and scooping up the candy and bright-red Lakota YouthStay backpacks that we tossed to them – as is the tradition of this event.  By the time is was over, it was drizzling steadily and the candy and backpacks were gone.

The Story of Lakota YouthStay Program

The Lakota YouthStay Program is a new offering from Sanctuary UCC.  The program will provide cultural exchange opportunities for Lakota youth (ages 10 – 15) from Pine Ridge and the hosts with whom they stay during a week-long trip to Medford.  The program is designed to open up possibilities for Native American youth and provide local hosts with a better understanding and appreciation for Native American history, culture and current life on the reservation.  It is the brainchild of two long-standing members of Sanctuary and West Medford residents, Joy Harris and Bruce Roberts. Since 2012, members of Sanctuary, local neighbors and friends, have volunteered to work on housing improvement projects on the Pine Ridge Oglala Sioux reservation through Re-Member, a non-profit agency located on the Reservation.  The Pine Ridge Reservation covers almost 3500 square miles of badlands and prairie grassland and is located in the southwest corner of South Dakota. About the size of Connecticut, the reservation is home to around 30,000 people and contains one of the poorest counties in the United States with close to 85% unemployment, high rates of diabetes, teen suicide, alcoholism and substance abuse.

Through these volunteer experiences and their own commitment to learning, Joy and Bruce learned much about the history and culture of the Lakota people. As well they developed an understanding of the historical trauma to the Lakota people resulting from official government policies, broken treaties and promises.  Today, the difficult and challenging conditions experienced by the people of Pine Ridge rival some third world countries with a severe housing crisis and many families living without indoor plumbing or electricity. In 2015, Pine Ridge experienced a higher than usual incidence of teen suicide which cast a dark shadow over the reservation. The couple began wondering what else they could do to stand with the Lakota people and possibly offer a sense of hope and opportunity to the young people – many of whom have never been off the reservation.

What if Lakota youngsters could get a glimpse of the world beyond the reservation?  What if they could stay with volunteer host families in the Medford area for a week or so and see what there is to experience in Greater Boston?  What if they could visit a science or art museum, go to a beach, or on a whale watch?  What if a group of Lakota kids could visit Wampanoag youth on Cape Cod? What if they had an opportunity to tour Harvard or Boston University with Native American college students? Might the kids be inspired to stay in school, continue their education and pursue advanced studies?  Might they discover a new interest or passion to explore, develop new skills and knowledge to bring back to the reservation and improve life for their people over time?

Or – was this a bad idea dreamed up by middle-class, East Coast, white do-gooders? The next step was to ask people on the reservation what they thought of the idea. In the course of their four previous trips to Pine Ridge, Joy and Bruce had developed relationships on the reservation and they set about talking to these people to get their response to the idea. The feedback was overwhelming positive and they were encouraged by to move forward with the idea. In October of 2015, Joy met Tosa Two Heart, a young Lakota woman born and raised on the reservation, through a serendipitous Facebook connection.  Ms. Two Heart has recently arrived in the Boston area to begin a Master’s Program at Bentley University in Waltham. During one of their early getting-to-know-you conversations, Joy and Tosa discovered that they had similar visions to create opportunities for Lakota young people…and the Lakota YouthStay idea took flight!

In January of 2016, the Youthstay program proposal was presented the congregation of Sanctuary UCC – which unanimously voted to sponsor and help fund the development of the program. A logo, website (www.LakotaYouthstay.org), facebook page and program collateral were created. Advisors were recruited from Medford and Pine Ridge and hours were spent collaborating on ideas for the young people’s experience once they arrived in Medford, developing detailed application and support processes and checking with the folk on the reservation to ensure that we were on the right track. Finally, a plan was in place to introduce the program to the Lakota people of Pine Ridge Reservation. Advisors at one of the College Centers

After the Wacipi parade in Pine Ridge Village, a series of informational sessions were held at the Oglala Lakota College Centers throughout the nine districts of the reservation.  We came with full hearts and hands – bringing Lakota YouthStay t-shirts, backpacks, handouts and refreshments as well as a short presentation to share. The team, Joy, Bruce and Tosa as well as several Lakota advisors residing on the reservation, offered the story and listened to feedback from those in attendance. Families and kids attended each meeting and expressed great interest and enthusiasm for the program. Several of the kids literally gave the program a “thumbs up” with one 12-year-old asking, with glee,”Would I get to go on an airplane?”

On their final day on the reservation following the last of the nine meetings, Bruce and Joy were heading back to their lodging, and as the sun sunk low in the western sky, they saw a dozen or so small figures biking and strolling playfully down the dirt road toward them. The group was clearly having a great time and the couple slowed down to take in this golden moment.  As they slowed their “Lakota-YouthStay-adorned” rental to meet the group, they noticed that four women presided over the gaggle of kids. They stopped the car, got out and the group gathered around the car – asking where the couple was headed and what they had been doing.  The women were sisters and “aunties” to the pack of children. On the Road with the Two Lance Family!

This was the Two Lance family.  The eldest, Connie, was the spokesperson and they wanted to know more.  After hearing a brief description of the YouthStay story she said, “Oh! We saw a flyer about the program and meant to go to your meeting but we forgot…and now here you are!”  Joy and Bruce had a pleasant chat with the sisters and their grandchildren as the group looked west over the beautiful rolling prairie toward the golden sunset. Connie took note of the couple’s appreciation of the land and it’s beauty and commented, “This area of the rez is called Rainbow Valley ‘cause we get a lot of ‘em here”.  Connie sent us off with overflowing gratitude when se said, “This program is a great idea…..What can we do to help?” It was a beautiful end to a busy week for the YouthStay founders.

Are You a Host Family? The Lakota YouthStay program is now looking for enthusiastic, open-hearted Medford families with or without children to welcome Lakota young people from the reservation into their homes for one week in the summer of 2017. The first small group of six-to-eight Lakota young people are scheduled to be in Medford July 28 through August 5, 2017.  The program will cover all travel expenses and provide several group dinners during the week. Young people will be applying for the YouthStay program online and will be required to include references, proof of health insurance coverage.  A reservation-based YouthStay Advisor will meet with each applicant and our Medford Program Staff will meet with host applicants to ensure a mutually rewarding match is made. Host applicants will undergo background checks to assure Native families that their youngsters will be safe while in Massachusetts.   This is a great opportunity to learn about Native American life, build friendships with Lakota youth and serve.

For more information, to contact us, to make a donation to the program or to apply as a host family: www.LakotaYouthStay.org