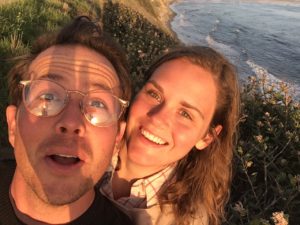 Originally from Santa Barbara, CA, John is a second-year Masters of Divinity student at the Boston University School of Theology who is excited about offering Sanctuary a wealth of superfluous skills including but not limited to: poetry workshops, cardboard smithing, stage combat, and (theoretically) ministry. John has held leadership roles in the worlds of community arts, fancy dining, arts education, DIY theatre, and creative writing. He is passionate about finding the sacred anywhere people are gathered to support one another, make art, have too much fun, share a meal, or even worship God. He loves 12-Step Recovery, Taylor Swift, Simone Weil, funky Gospel, baking bread, painting watercolors, and building things that should not exist.

Before beginning seminary in the Fall of 2019, John spent a (more or less) decade on the fringes and in the center of various community-centered arts initiatives. In 2009 he was a founding member of Puppetyranny (a hefty portion of whose work, along with some early solo work of John’s can be found on:  https://jgrahamsinclair.wordpress.com/) a low-budget theatre collective founded in the Kensington neighborhood of Philadelphia. Performing in bars, basements, and on the decks of antique sailing ships (true story!) this work would eventually find John touring an unlicensed version of Les Miserables (built and rehearsed in the woods of Northern Vermont with neither electricity nor running water) with likeminded Der Vorfuhreffekt Theatre (https://www.donnaoblongata.com/less-miserable ). In 2015, John created The National Dinner Theater Institute, a pretend-fancy Summer performance residency in North Idaho for young theatre-makers while completing his BA in poetry at Hampshire College in Amherst.

John is committed to fostering spontaneity and imagination in all people and has worked extensively with youth. As a teenager, he became involved with the Santa Barbara Summer Solstice Parade https://en.wikipedia.org/wiki/Santa_Barbara_Summer_Solstice_Parade , eventually serving in technical direction, then as an artist-in-residence for several summers. From 2016-18 John 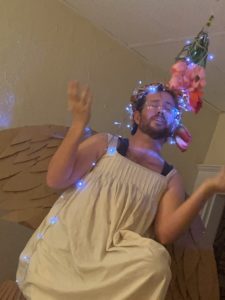 was a counselor/educator/kidstallation coordinator for Minneapolis’ premier cardboard adventure camp (https://adventuresincardboard.com/,) helping youth create a world of mischief, excitement and sometimes even harmony.  John has also held classroom-type positions, most recently as an instructor in the Creativity Academy at the Minneapolis Institute of Art. For more on John’s work in the arts, feel free to browse a few of these accompanying documents: CV, Arts CV & Visual Portfolio.

John is wicked excited to begin serving the combined super-congregation of Hillside/Sanctuary as we wave goodbye to 2020. John’s ministerial interests include: disability, hospitality, pastoral care, the poetry of the Hebrew Bible, and working to reclaim practices of lament. While John’s role at Sanctuary is continuing to emerge, there’s a good chance it will involve kitchen tables, poetry, puppets, songs, and/or all of the above.