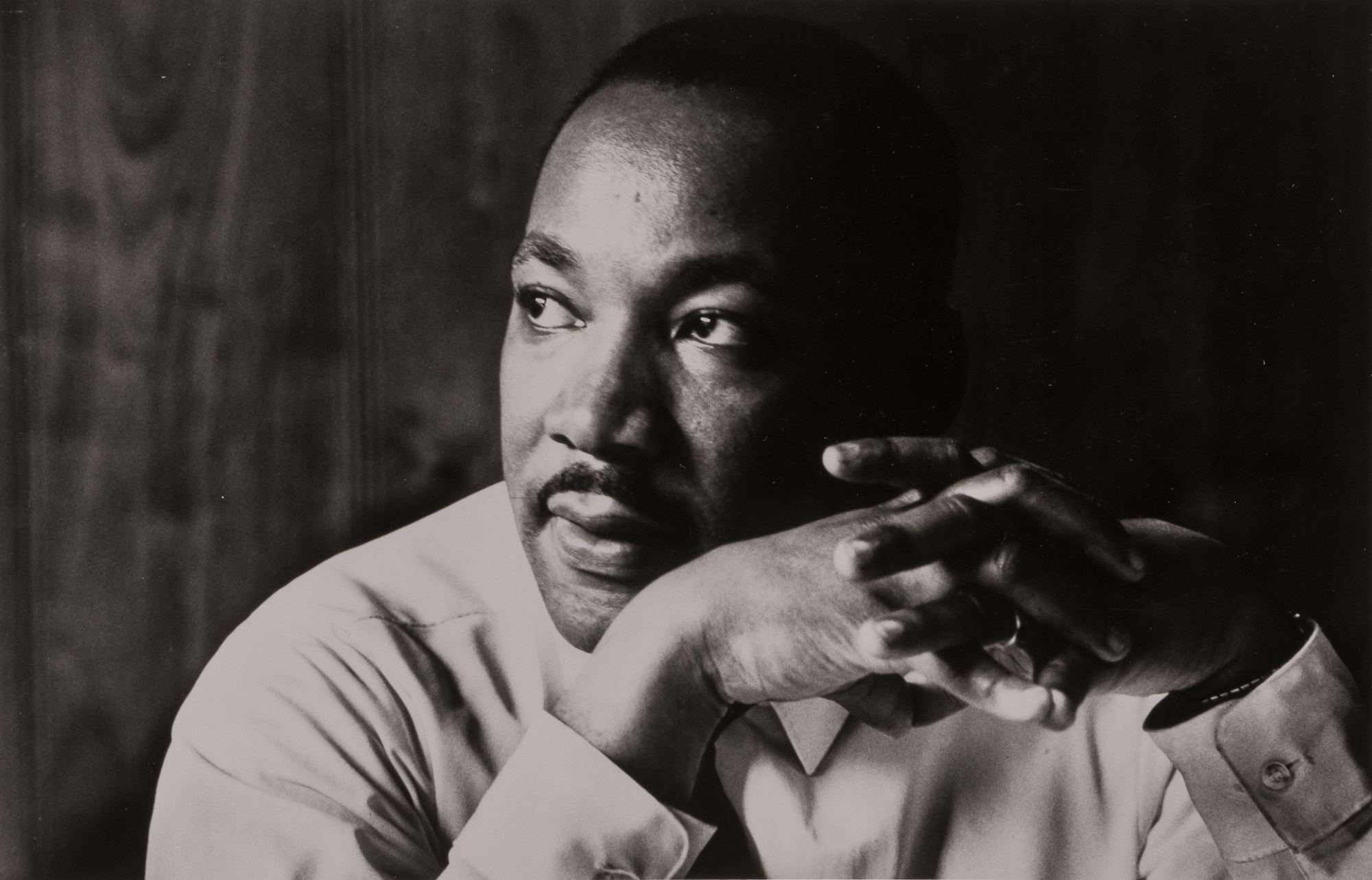 Satyagraha: At the Table 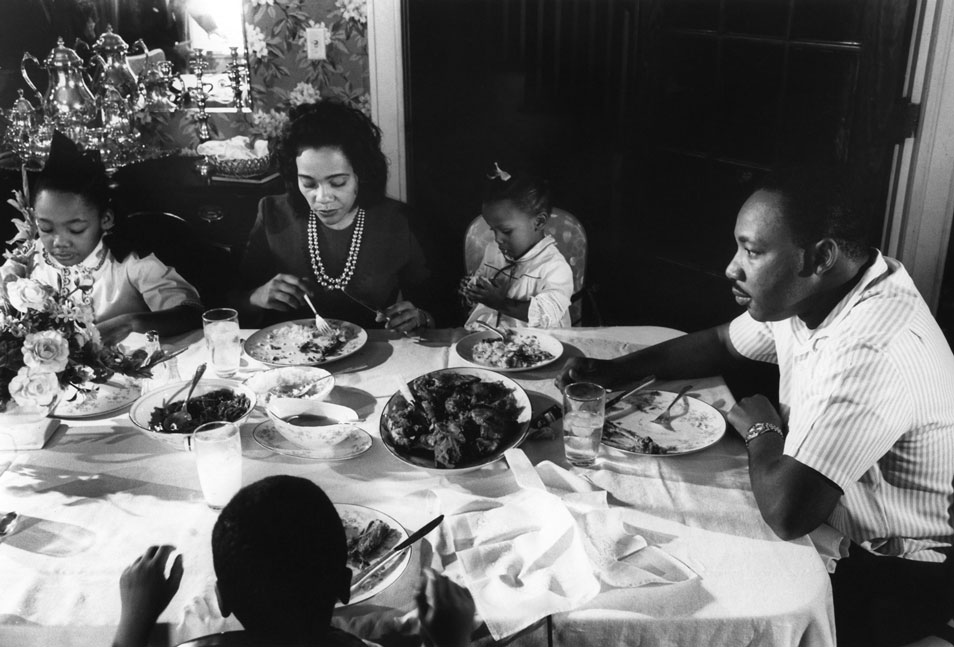 They are seated at the dining room table like so many American families. It’s Sunday after church. There are flowers at the center, flanked by bowls of fried chicken, greens, potatoes, and gravy. The children’s glasses are filled with milk.

What makes this scene so remarkable is not its Norman Rockwell-like portrayal of a family at dinner, but the identity of those present. For at the head of the table is the Rev. Martin Luther King, Jr., and with him are Coretta, their two girls, Yolanda and Bernice, and two boys, Martin and Dexter. Taken in 1964, the photograph captures a peaceful moment in a year fraught with conflict and peril.

The setting couldn’t be more domestic—the flowered wallpaper, the walnut-shellacked French doors opening to the living room, the dining set of chairs supplemented by a high chair brought in from the kitchen for Bernice.

A freelance photographer for Ebony and Jet magazines, Flip Schulke met Dr. King in 1958. The two stayed up late at night talking, beginning a friendship that would allow Schulke for the next decade to document the Civil Rights icon and his family. The result was the 1995 book: He Had a Dream, a stunning collection of photographs of both public and private moments. 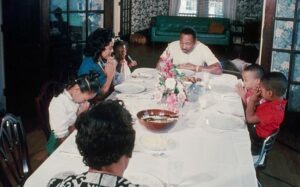 Of several photographs Schulke took during dinner, one shows the family during the blessing—heads bowed, the hands of the little ones folded. Another shows Martin serving the boys fried chicken. 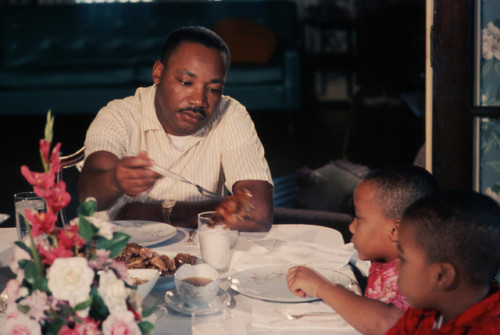 It is all so ordinary, which, perhaps, is the point. Here there is no conflict, no confrontations between marchers and police, no water hoses or dogs. There are also no moments of triumph, Dr. King on the mall in 1963, or accepting the Nobel Peace Prize in December of ’64. Here are only the contented voices of a family enjoying their meal together, with perhaps an admonition from Coretta to the children to mind their manners.

Yet there are details hinting at the enormous battle Dr. King was leading. Sitting at the table on this Sunday, the Reverend has taken off his jacket and removed his tie. His white, short-sleeved shirt is unbuttoned at the neck, and one arm rests on the tablecloth. Yet his shoulders are sloped and he looks tired.

Since he stepped up to lead the Montgomery bus boycott in 1956, he has faced virulent opposition. He has been stabbed and stoned. He has been arrested dozens of times. It was in jail that he penned the now-famous “Letter from Birmingham Jail,” articulating the spiritual and political basis for non-violent protest. Now he may be wondering if President Lyndon Johnson will indeed do what he has promised, champion the Civil Rights Act of 1964.

As I continue to examine Shulke’s photo, scanning the furnished room, I see something unusual. Hung above the French doors is a framed portrait. Zooming in, I see it is of Mohandas Gandhi. For me, the portrait rings like a bell. It is a clue to the photograph’s deeper meaning.

For Gandhi’s life, perhaps more than any other, was for Dr. King the pattern for his own. It was Gandhi’s principle of satyagraha, or truth power, that would fuel Dr. King on his quest to bring radical change through non-violent action. The Gandhi portrait also, sadly, foreshadows the tragedy awaiting King, as he, like the beloved Hindu revolutionary, will four years later be gunned down.

Flip Schulke’s photographs of Dr. King and his family capture some of the momentous events of his life. The dinner-table scenes, however, teach me how much King was like us. How he gathered, as we do, with those we love. How we, too, can be nurtured and strengthened for the challenges ahead by what happens at the table.

As we commemorate Martin Luther King, Jr., in 2023, may we continue to honor his memory and the ideals for which he gave his life.